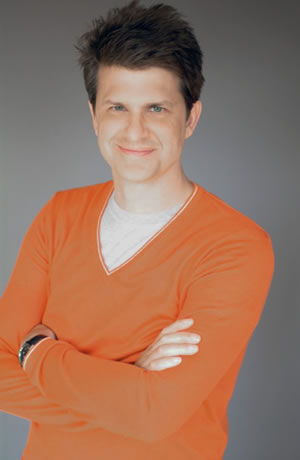 John Lehr is a comedic performer, writer and producer working in television, film and theater. Along with his producing partner Nancy Hower, co-created Hulu’s comedy series “Quick Draw,” in which he also stars and executive-produces. Lehr starred as Leslie Pool in “10 Items or Less,” the half-hour improvisational comedy series from Sony on TBS. Lehr also co-created and executive produced the series, which ran for three seasons.

Lehr is one of the original Geico Cavemen from the wildly successful commercial campaign. He appeared in dozens of spots, including the first commercial as a caveman boom operator, the caveman in therapy with Talia Shire, the tennis spot with Billy Jean King, Superbowl spots with Phil Simms and many more.

In addition, Howler Productions created the pilots “Team McPhearson,” an animated series inhabiting the world of Nascar for Fox starring Jeff Foxworthy; and “John Lehr Movie Club” for TBS. Lehr and Hower completed a pilot script for Sony Television in association with the BBC and are developing a pilot for HBO.

As an actor, John has appeared in numerous television series, including “Friends,” and was a series regular on “Jesse,” both for Warner Brothers/NBC. His feature film roles include “The Sweetest Thing,” and three Noah Baumbach films, “Kicking and Screaming,” “Mr. Jealousy,” and “Highball.”

Lehr’s critically acclaimed Comedic Lectures solo performances have had sold out runs in LA and New York. He is also a respected improvisational performer having worked at the Organic Theater and Steppenwolf Theater in Chicago, The Montreal Comedy Festival, Chicago Improvisational Festival and multiple venues in Los Angeles and New York.

John’s hosting credits include “News Weasels” for E!; “I’m a Celebrity…Get Me Out of Here!” for ABC; CBS’ special “Clash of the Commercials” with co-host Heidi Klum; and “John Lehr’s Movie Club” for TBS.

John is married to author Jennifer Lehr with whom he has two children. The Lehrs reside in Los Angeles.